Difference between revisions of "Khotot/Quick start"

Instead of editing a TTF file directly, we are going to work on SFD files (the internal database format that FF [2] uses). Those files are available at Arabeyes CVS. You can access the files using the web interface; https://git.arabeyes.org/arabeyes-art/khotot , or get your local cvs copy:

We are going to fix the anchor points, anchor points are helper points over the glyphs that tell the font renderer where to position the glyphs relatively to each others. In our case, we have two types of glyphs; base glyphs like Alef (أ), Beh (ب) ..., and diacritic marks (Harakat[3]) like Fathah (َ ) and Dammah (ُ ).

First select Encoding -> Compact, this will get rid of empty code points and will make navigating through the font easier. 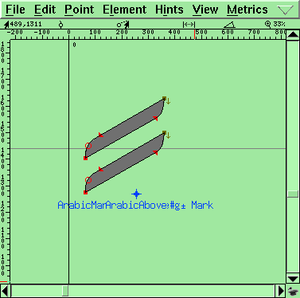 At first we will edit anchor points in diacritic (Harakat) glyphs, in "View -> Go To" type uni064b, this will take you to Fathatan glyph, click on it then move the anchor points (the blue star) just below it, see the screen shot.

Repeat this with other marks, but remember in case of Kasrah and Kasratan to put the anchor points just above the marks.

Shaddah is a special case, its ArabicMark2MarkAbove point should be above it as this point will used to place marks like Fathah and Dammah above Shaddah, other points should be bellow it.

Instead of editing each glyph separately, we will use a nice FF dialog called Anchor Control dialog. This dialog allow editing anchor points and viewing its effect on the fly, which allows tuning the position of each point. 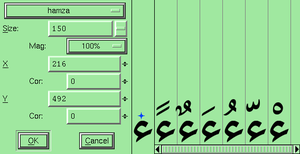 From the anchor control dialog you can adjust anchor points as appropriate and see its effect, use Page Up and Page Down to navigate through the glyphs.

When marking anchors to ligatures, the Anchor Control dialog will include many occurences of a certain ligature in the drop down menu, depending on the number of letters composing the ligature (Twice for Lamalef). Therefore, pay attention to place the anchors on the different letters respectively as in the drop down menu.

When there are two diacritics over a glyph (For example: بَّ), one should be above the other. To avoid the overlap that would happen, we use a ligature substitution mechanism.

The above tables lists each glyph and its component. To access the code points in Fontforge, be sure "Compact" is unchecked in the "Encoding" menu. Then go to "View -> Goto" to type the unicode value of the glyph. Edit the glyph as appropriate.

From "File -> Execute Script", check the FF box, and type:

Go back the the glyphs. In the entry "Element -> Glyph Info -> Ligatures", click on "New Ligature", choose "'rlig' Required Ligature in Arabic lookup 6-1" from the menu. In the next text box, enter the components name of the ligature, (shadda dammatan) for example. Repeat this with the other glyphs and save your font.

As a lst step, remove "'mkmk' Mark to Mark in Arabic lookup 2" lookup table, from Element -> Font Info -> Lookups -> GPOS , this to insure mark2mark anchors won't be used insted of the ligatures.

After playing with the font, you will need to build a TTF[5] file to test it.

We have a tool for this; tools/generate.pe, copy this files to your home directory, then:

Where font.sfd is the original file and font.ttf is the name of the file that will be generated.

Then open any text editor like Gedit or Kedit and test your font, avoid testing it in OpenOffice as it might give you wrong behaviour.